A thick layer of fog welcomed the players to the final day of the inaugural Disc Golf European Masters. 75 Mens open division players and 7 Womens open division players got the privilege to compete on the championship Sunday here at Järva DiscGolfPark, while the rest of the field missed the cut by one or more strokes. The MPO division cut limit was most likely the highest in any PDGA Major up to this point, if measured by the average round ratings. Finnish Jukka Pyhältö was among the first players to miss the cut, with 3-round total score of +3 and rating average of 984.

Allen shoots the hot round, takes home the victory 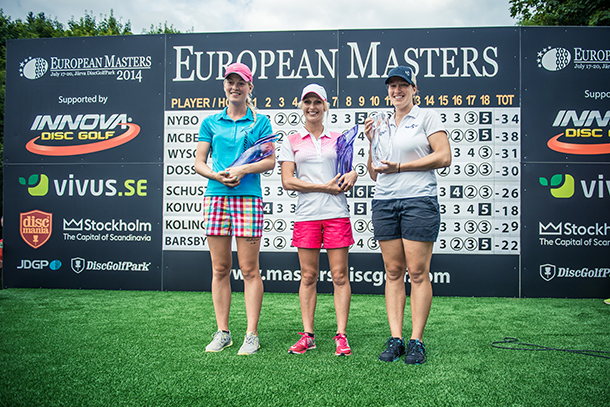 Starting the final day with a 6-stroke lead over Swedish Ragna Bygde on the 2nd place, Catrina Allen (USA) had no troubles keeping the competition behind her on the final round. With much of the pressure off her chest, Catrina ended up shooting the hottest round score of the tournament in FPO division, a 62/-2 thanks to which she was able to stretch the gap between her and Bygde to 8 strokes in the final results. Bygde also got a strong finish for her tournament, carding a 986-rated 64 on the last round and securing the second place by a 10-stroke difference.

The third place officially ended in a tie between Valarie Jenkins (USA) and Paige Pierce (USA), who was struggling with her lines on the last round, carding a 73/+9. Valarie, who started the round 7 strokes back from Paige, was able to catch up with the difference, much thanks to her great birdie on the 17th. The trophy winner was settled in an exciting sudden death play-off on holes 16, 17 and 18. After matching bogeys on hole 16 and birdies on the 17th, the last sudden death hole was to determine the winner of the play-off. Valarie was able to play a solid par on the last one, while Paige had to settle for a bogey, giving Valarie the chance to be the 3rd lady on the podium at the prize ceremony. 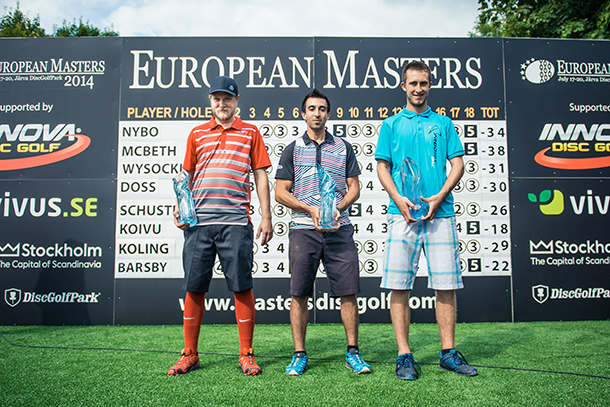 As many followers of professional disc golf know, Paul McBeth (USA) is known for finishing strong in big tournaments. While coming from behind on the final day and taking the victory was McBeth’s signature move on tour last year, this year the same magic has not worked quite as efficiently. This time though, McBeth found his signature McBeast mode already on the very first hole by carding a very convincing tap-in eagle on the Par 5. Danish KJ Nybo, who started the final with 2-stroke lead over McBeth, played a very decent 58/-6, but simply couldn’t stay on pace with McBeth, who was already at course record going into the last 2 holes.

On the 17th, Paul even had a chance for an eagle, but missed his putt by less than an inch. On the last hole, Paul shot another picture perfect drive, but caught one of the worst breaks in Major history, as his disc landed on the uphill fairway and slowly rolled more than 30 meters down the hill to OB. At this point the score difference was luckily big enough for Paul to play a safe bogey, securing the victory of the inaugural European Masters. Paul also set the new course record to 52/-12, despite his misfortune on the last hole. Behind Paul, KJ Nybo finished on the 2nd place, 4 strokes back from Paul. The other lead card members Ricky Wysocki (3rd) and Nathan Doss (4th) kept their positions from the 3rd round, both shooting 57/-7 today.

As always, the official tournament results can be found at the PDGA tournament page. Hole-by-hole scores are also available for a limited time on the live scoring page. The archived live broadcast, shown on Finnish television is available for viewing without country restrictions for the next 30 days. The same broadcast can be viewed with Swedish commentary on SVT Play. From the event instagram account and the photo feed page, you can find live update videos and photos from all tournament rounds. The official event photos can be found at the European Masters facebook page. The SpinTV was also on site to capture the action this week, so stay tuned for the MPO lead card play-by-play coverage from the final round and more to be published in near future.