For many players European Masters is the highlight of the disc golf year. As a player you’ll want to be as prepared as possible to face the challenges that Järva DiscGolfPark offers. But accidents happen, and not everybody has the same preconditions for this tournament. Swedish legend Dan Johansson, 55 years old, seriously injured his right hand ten days before the tournament. 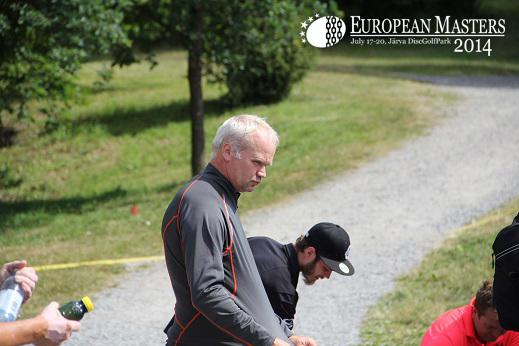 “I was servicing the lawnmover at Ale discgolfcenter outside Göteborg, when the wrench slipped and my hand came down on the new blades. The cut was bone deep and we had to go to the doctor to stitch the hand up.” Dan explains the accident.

Dan thought about getting the stitches removed before the tournament, as it would have allowed the hand to be less stiff. But the risk for the wound breaking up was too great. So he plays with a stiff hand, but he is happy about participating in European Masters nevertheless. The first round was ok, according to him, and he finished on par. Today, on the second round, he was off to a hot start with five birdies on the first six holes. As he said to me, just before teeeing off on the second round:

“I hope that the final article will be not about my injury, but about an old guy making a remarkable come back and winning the whole tournament.”

Dan had to invent a new grip for the tournament, since his little finger is taped. Despite this Dan shot an impressive round of 59, five strokes below par. Feeling more confident that his grip works, the rest of the field will have to keep an eye out.

Tags: comeback, Dan Johansson, injury
From: News
← KJ Nybo’s Hole in One caught on tape
Distance showcase after round 3 on hole 1 →