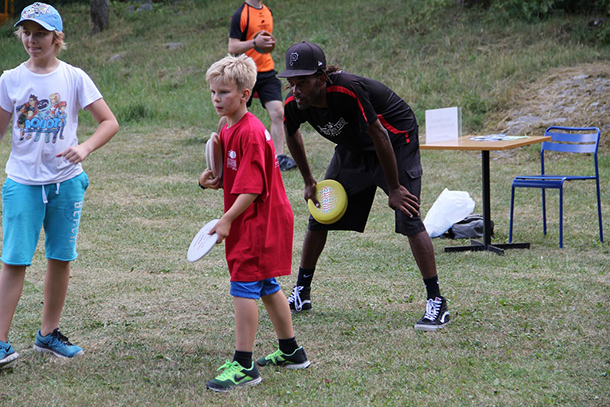 Niclas Schaarschuch has come from Växsjö with his kids to attend a hockey camp here in Stockholm. Being a frisbee player, he couldn’t resist the temptation to check out the action at Järva DiscGolfPark. His kids tagged along, became interested in the game and decided to try out some throws at the short course. Luckily for them, Philo Brathwaite was nearby, and he spent half an hour instructing a bunch of kids on the basics in Disc Golf.

“It wasn’t anything planned, more a spur of the moment thing. I like to help people out when I get the chance. It’s all about giving back to the sport”, Philo says.

For Niclas, the impromptue clinic was a golden opportunity to introduce disc golf to his kids.

The kids wanted to try the short course, Philo saw them and came over to give tips. Later in the evening they logged onto YouTube and watched Philo on film. It’s safe to say that they’ve found a new hero.

Niclas thinks that Hugo, aged 13 and Johan, aged 10 will continue to play now that they’ve found the sport. To have a world class player giving them advice was a huge benefit.

– I’ll have to give the local course a look over now. And put up my basket in the garden.