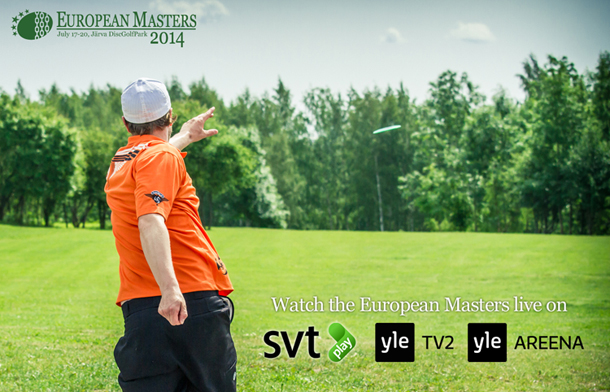 We are proud to announce that we’ve partnered up with the Swedish public broadcasting company SVT to bring the defining moments of the inaugural Disc Golf European Masters available live via web stream to both Swedish & international audiences. SVT’s web stream portal SVT Play will broadcast a 110-minute live coverage from the final round of the event, highlighting the crowning moments of both Men’s Pro Open & Female Pro Open divisions on Championship Sunday.

The broadcast will feature commentary in Swedish and it’s available for viewing free of charge both in Sweden as well as around the world. “After seeing the impact of the live broadcast on Finnish television with the European Open last year, we knew that bringing the sport accessible to new audiences thru live broadcasts is one of the best ways out there to grow the sport”, Says Head of Tournament Organization Jussi Meresmaa. “With an astonishing venue like the Järva DiscGolfPark and highest level of competition in any European event this year, we are sure to show the best possible image of the sport to possible new players in Northern Europe and around the world”, Meresmaa continues.

Earlier this summer we reported about our partnership with Finnish public broadcasting company YLE, covering a live TV broadcast on both Finnish national TV & the live streaming service YLE Areena.

The European Masters will gather all of the World’s top Disc Golfers like Paul McBeth and Simon Lizotte to Järva DiscGolfPark in Stockholm from 17th to 20th of July. The total amount of players accepted to the event is 144 with representatives travelling from 15 separate countries. The total prize purse for the event is over 30 000€.

If you have questions concerning the European Masters, please contact the event producer Jukka Teräs at jukka.teras@innovaeurope.com.